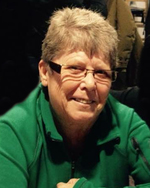 Rona graduated from Calais Memorial High School, Class of 1973. She worked for Merrill Trust and other local banks before she found her real calling, being a caregiver. In 2007, Rona started working for Sunrise Opportunities at the Calais Boarding Home where she enjoyed attending and supporting the residents at the Special Olympics. In 1992, she met her love, Joyce Dunphy. Rona was a former member of St. Croix Bowling Club and St. Croix Country Club. She enjoyed golfing, spending summers on local lakes, and was an avid sports fan, especially Calais teams and the Angelo State Rambelles, where her niece plays softball.

In addition to her parents, Rona was predeceased by an infant brother; and her beloved Joyce. Surviving are six sisters, Janice Tollison and husband Chuck of Waco, TX, Theresa Porter and husband James of Calais, Mary Jean Redding and husband Jeffery of Calais, Patricia Reynolds and husband Dana of Meddybemps, Martha Apkarian and husband Rob of Calais, and Catherine Cartwright and husband Brian of Veazie; three brothers, Daniel Robb and wife Brenda of Calais, David Robb of St. Augustine, FL, and Bernard Robb and wife Marcy of Jalisco, MX; 57 nieces and nephews plus two more on the way; her uncle and Godfather Dan Hollingdale and his wife Carol of Bangor; her aunt and Godmother Gloria Hollingdale of Calais; Joyce’s mother, Lorraine Curtis of Harrington; and many cousins and numerous dear friends.