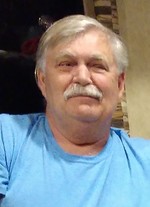 Princeton – Dennis Owen Worster, 66, passed away on October 15, 2018 in Calais. Dennis was born at home in Kingman to Osman Chester and Edith (Allen) Worster on May 17, 1952. He grew up in Kingman, one of 15 children and married Jeanette M. Clark on July 22, 1972 with whom he raised their three children in Princeton.

His faith in God and his family were his life. Dennis loved attending his grandchildren’s soccer games, spending time at his camp on Pocomoonshine Lake with his family, traveling with his wife, hunting and attending the annual Worster family reunions. It was in Florida at his daughter’s home where he and Jeanette traveled during recent winters that he taught himself to play the organ that he dragged home in the trunk of his car. They visited the Grand Canyon together, with his brother and sister, and at home in Princeton Dennis tinkered with “Little Al”, his John Deere tractor. He touched the lives of many young people as a Sunday School teacher and the Commander of AWANA, the youth program he and Jeanette ran for many years at his church. He made wonderful memories for his family and will be missed.

In addition to his parents, Dennis was predeceased by three sisters, four brothers and his sister-in-law, Jennie Brown.

He will be remembered by his loving wife of over 46 years, Jeanette M. Worster; his children, Kenneth A. Worster and his wife Jenny of Bradford, Kimberly E. Currier and her husband Matthew of Zephyrhills, FL and Kevin D. Worster and his wife Carrie of Bradford; two sisters, Crystal Shorey and her husband Lionel of Lincoln and Edith Grant and her husband Michael of Chester; five brothers, Michael of Lagrange, Roderick and his wife Marilyn of Waterford, David and his wife Susan of Hiram, Daniel and his wife Debra of Ruskin, FL and John and his wife Karen of Hiram; nine grandchildren, Bethlehem, Lydia, Yosef, Caleb, Lincoln, Ellissa, Connor, Reagan and Fiona; a sister-in-law, Janice Curtis and her husband Jim; brothers-in-law, Gene Clark and his wife Laurie and Jerry Brown, all of Princeton; many nieces, nephews and special friends, including Thomas and Barbie McLaughlin, Kenneth and Diane Porter, Ronald and Joanne Tupper, Ed and Janet Perkins, Len Hanson and all of his extended family at Woodland Baptist Church.

Ethiopia was near and dear to Dennis’ heart, as it was from there six of his grandchildren were adopted. Over the years, he supported Little is Much Ministries of Maine. This organization works in Ethiopia to evangelize the lost, to come alongside Ethiopian brothers and sisters in Christ to support their work in Ethiopian orphanages and communities, and to show the beauty of Ethiopia to others. In lieu of flowers, please consider making a donation to Little Is Much Ministries of Maine, 185 Wilder Davis Road, Bradford, ME 04410.

Visitation will be held from 12:30 until 2:00 pm, just prior to the memorial service which will begin at 2:00 p.m., Saturday, October 20th at Mays Funeral Home, 26 Church St., Calais with Pastor Linwood Trott officiating. A committal service at South Princeton Cemetery will follow.