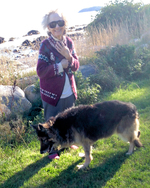 Estelle A. Ross (Potenza), her earthly mission complete, walked to the Lord’s call on 12/31/18 at 11pm. She loved her faith as she lived the scripture passage from Mathew 28:20...”I came to serve not be served”. Estelle served her country and family and relished that role as a wife of a Foreign Service Office and Mother. She loved Maine and on numerous occasions said that she finally felt that she “fit in” in on the Bold Coast of Down East. After decades of never being allowed to choose her dwelling place, she finally chose her home in Machiasport after vacationing with her son and “4 legged daughter” over 4 years in different parts of Maine. The beauty of God’s creations ever present at her home gave her great joy, amazement and peace. The deafening roar of the ocean accompanied her daily and escorted her home the day Jesus called to her. Estelle’s diminutive stature was juxtaposed to her lioness tendencies when it came to her family. Shy and reserved only to a point then…Watch out!!!! Her Husband Louis Ross often blamed her “spirited nature” for hindering his ability to be promoted. Many people commented on her smile as it was always on her face. I always repeated to her a lyric of an old song by the Temptations which stated “You’ve got smile so bright, you know you shudda been a candle”. She used to laugh at and did so on her last earthly day. Many saw her in church and always asked about her and have now said how much she’s missed. Our Heavenly Father and his Beloved son now share Mom’s beautiful smile each day as it radiates down to those waiting to be called including her two sons, Mark and David from Machiasport and Signal Mountain Tennessee respectively. She hated flowers being brought to her so any contribution should be made to the Machias Food Pantry or American Humane Association.
Printable
Share on Facebook
Recently Shared Condolences
Leave a Condolence
View All Condolences
Recently Lit Memorial Candles
Light a Memorial Candle
View All Candles
Recently Shared Stories
Share a Story
Recently Shared Photos
Share a Photo
View All Photos